Why is the GCP_CIS_1_2 compliance recommendation listed in Advanced Suppression but is not listed in the main Compliance Report panel?​

Why are both the GCP CIS 1.0 and 1.2 benchmarks available in the Compliance reports?​

As of v4.22 (platform release on 21st September 2021), the CIS 1.2 benchmarks were added to the Lacework GCP analyzers. You have the option of selecting either benchmark version on the GCP Compliance Reports page (alongside other benchmark options). 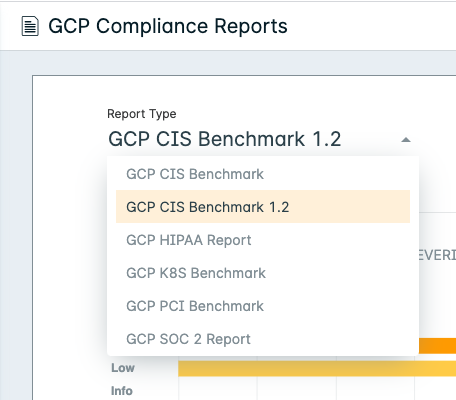 How do I start using the GCP CIS 1.2 benchmarks?​

See the GCP CIS 1.2 Benchmark Report guide for instructions on how to enable the CIS 1.2 benchmarks.

Are the GCP K8s Benchmark rules part of the GCP CIS 1.2 benchmarks?​

The GCP K8s Benchmarks are bespoke Lacework rules and are not associated with the latest CIS K8s benchmarks for GCP. They are related to the GCP CIS 1.0 rules. The K8s benchmarks are not removed. They are a separate report (which contains CIS 1.0 Kubernetes control rules) in the GCP reports tab and in the reports drop-down.

Why are some rules missing when viewing the GCP CIS benchmark reports?​

In addition, some rules are fully 'Automated' while some are categorized as 'Manual'. 'Manual' rule types cannot be assessed end-to-end by Lacework platform, and must be left to the customer to follow the auditing procedure.

The following table is a list of all the Organization level GCP CIS benchmark rules:

For Organization level GCP rules that are Automated - if any violations are found, you can obtain the results as follows:

In addition, the resources in violation will surface to the Events Dossier screens.

For Organization level GCP rules that are Manual - these rules do not appear in the Lacework Platform.

In addition, GCP_CIS12_1_1 has been incorrectly categorized as an 'Automated' rule in the GCP CIS 1.2.0 benchmark. This is recognized by CIS as incorrect and will be updated to 'Manual' in subsequent benchmarks.